Keep reading to learn about the woman featured for the month of January! Maria Sibylla Merian was a naturalist and scientific illustrator. She is credited with creating the first drawings and water-color paintings of several insects and plants. Her observations and drawings of insects’ life cycles helped dispel that bugs emerged spontaneously from mud. Keep reading to learn more about this STEAM Hero from history.

From a young age, Maria Sibylla Merian collected insects. She was particularly interested in silkworms. Merian was born to a family of printers, which provided her with contacts and training that others did not have the opportunity for. She was fortunate as she grew up and her desire to study insects (both near and far) grew bigger; she had the access to training and materials that she needed. Merian was also literate in German during a time that women were often not educated. Again, in this regard she was rather fortunate.

Merian spent most of her life in Amsterdam, and she made a living from science. She made significant contributions to the fields of biology and ecology—although ecology was not formally a field of study, yet. Through her observations and her drawings, Merian described what we now know as food chains and how certain species were clustered together in what we now call an ecological community. She chose to illustrate the relationships between insects, plants, and their surroundings instead of just one at a time on a blank background. 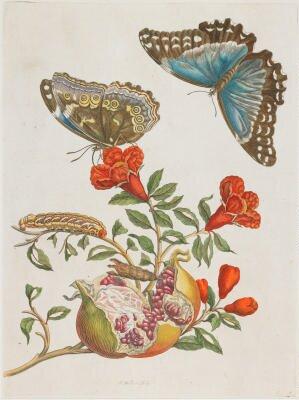 During Merian’s upbringing, people believed that insects spontaneously appeared from mud. Little else was known about them. Merian was one of the first European naturalists to observe insects and describe what their life cycles were actually like—and surprise! They did not come about spontaneously from mud. Instead, she documented the process of metamorphosis and the plants which insects chose for their transformations. She illustrated the life cycles of 186 insect species. Her 2nd collection of engravings was the life cycle of a butterfly from a caterpillar.

During a time when usually only wealthy men went on scientific expeditions, Merian took several. She used the money she made from her scientific illustrations to fund these research trips. Her most notable trip is to tropical Surinam (now Suriname) in South America. She and her youngest daughter made this 2-year trip, and she published the book “Insects of Surinam.”

Members of all-male academic and scientific societies bought and discussed Merian’s books. Ironically, she could not join. Merian taught an all-female scientific illustration class, which was the only one of its kind in Europe during her lifetime.

I do want to reiterate that Merian was a bit privileged in her upbringing, which helped her become the noteworthy contributor to STEAM that she is today. I also want to note that Merian used slaves during her time in Surinam. Although she acknowledged their contributions to her work, she was no abolitionist!

Nonetheless, Merian is considered one of the most influential naturalist-artists of all time. We owe the discovery of nine species of butterflies, two species of beetles, and six kinds of plants to Merian. Her combined love of art and science, and making them one, lives on today!

Flora, fauna and fortitude: the extraordinary mission of Maria Sibylla Merian | Art and design | The Guardian

Maria Sibylla Merian, The Woman Who Made Science Beautiful – The Atlantic